Aberdeen FC has announced that TEXO will be the Club’s new shirt sponsor for the next three seasons, starting from season 2022/23.

The Aberdeen-based industrial services provider has signed this unique deal to become the Club and Youth Academy sponsor from 1 July 2022.

Already a long-term advertiser at the Club, TEXO will benefit from having its logo adorned on the Club’s shirts as well as on prominent areas of Pittodrie, including the dugout and advertising behind the goals.

Under the new deal, TEXO will enjoy high profile branding on the shirts and training kits worn by all the Club’s professional teams and youth academy teams – excluding Aberdeen Women who have a separate sponsor – as well as all replica shirts for sale to the public from July 2022 onwards. The prominent X of the TEXO logo will also feature on the rear of all matchday playing shorts used by the first team.

Rob Wicks, AFC’s commercial director, said: “TEXO is a strong and dynamic brand, committed to the local market, and we are thrilled they have chosen to increase their support for the Club, starting this summer.

“It’s already evident that we have common goals and shared values and we are looking forward to working together to ensure both parties derive maximum value from this partnership when it gets underway later this year.

“Like the Club, TEXO has ambitious plans for the future and believes in working flexibly, imaginatively and responsibly to deliver results.

“The rights package from the Club, that underpins this deal, will undoubtedly help TEXO achieve its goals as the business expands both in Aberdeen and beyond.”

Commenting on the deal, Chris Smith managing director of TEXO, added: “We are proud to be the official sponsor of Aberdeen FC from next season. The Club is steeped in history and sits at the heart of the community to which TEXO is committed.

“There are many parallels between TEXO and AFC particularly in terms of how we build dynamic, multi-disciplinary teams, with creative thinkers, service‐givers and problem solvers.

“We are excited about this new future partnership with the Club and look forward to kicking-off next season.”

AFC chairman, Dave Cormack, added: “The official shirt sponsor is an important contributor to the Club and a significant investment for an organisation. At Aberdeen, we’ve been fortunate to secure some great brands over the years and to work with them in genuine partnership. We are looking forward to enjoying a strong and meaningful relationship with TEXO from next season.

“Rob and the commercial team must be congratulated for building a relationship with TEXO which has culminated in this, our most ambitious sponsorship deal.” 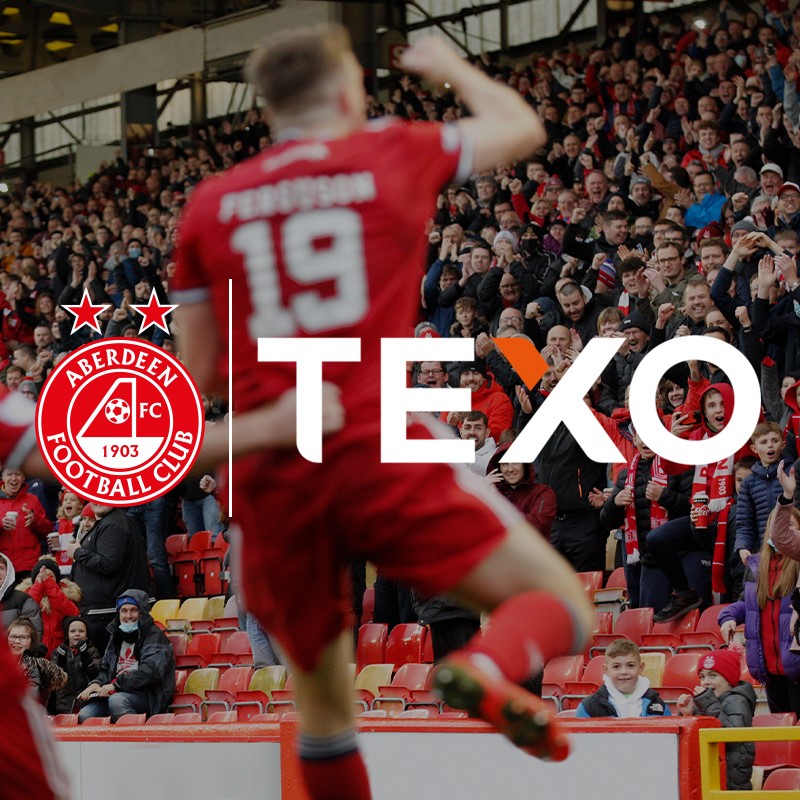